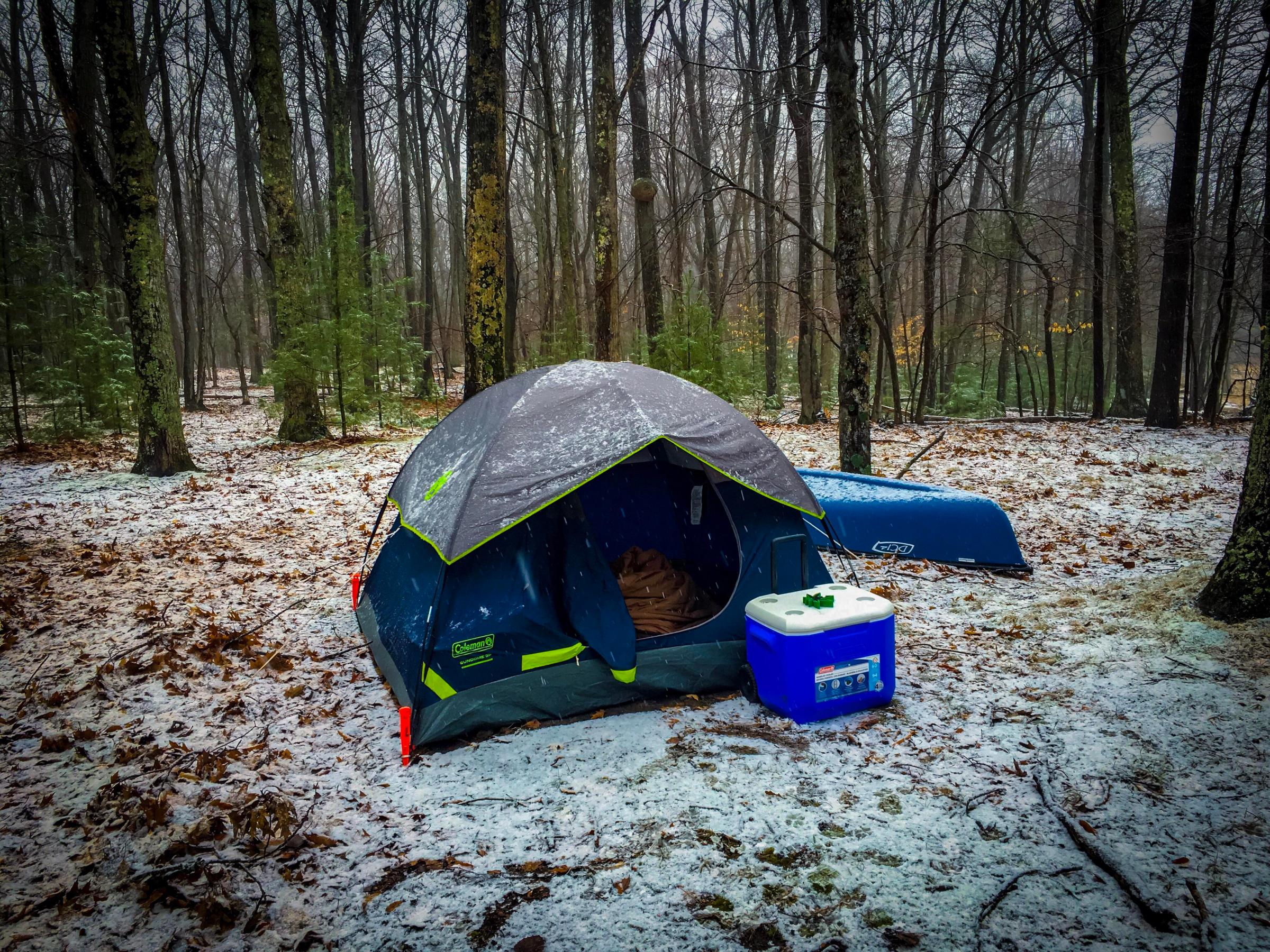 Get it on Amazon here Coleman Dome Tent for Camping

The Coleman Sundome Tent is one of the most popular tents on the market for beginners and veterans alike. The sundome tent can be purchased from the 2 person version up to the 6 person tent version.

can be purchased in green or navy/grey color. It is made of Polyester taffeta 75 denier flysheet material. The sundome is weatherproof with welded corners and inverted seams to keep water out. The tent comes with a rainfly for extra weather protection. The Sundome 4 person weighed in somewhere around 8 lbs or so.

The Coleman Dome Tent is wind and rain tested, and is rated for up to 35+ mph winds. Is designed to be well ventilated due to the larger windows, and ground vent for added airflow. The sundome also has an eport, which allows you to run a power cord into the tent for your electronics. Such as charging your phone or laptop computer.

Overall the setup was easy with a 4 pole design that took about 10 minutes to setup.

We took the Coleman Dome Tent for Camping for it’s initial test run in early summer. The weather was a nice 85 degrees in the day, and around 70 degrees at night. We figured this would be the perfect weather to test the unproven Coleman Sundome.

Some rain was in the forecast for our second night there. With majority clear weather for the other 2 days that we planned to camp.

We set the Sundome up in a nice clearing surrounded by hardwoods on a dirt forest floor. For our test run of the tent we decided to use the 4 person tent version that we purchased off of Amazon here Coleman Dome Tent for Camping. Overall, with some pauses for wildlife we had the Sundome set up in about 15 minutes.

The only piece that we swapped out were the Sundome tent stakes. The stakes that came with the Coleman Dome Tent

were plastic and I didn’t trust them. Once we had our sleeping bags rolled out, the 4 person tent was quite roomy. Granted there was only two of us on this trip.

The Sundome felt sturdy and the material of the tent felt like it would hold up to the rain that was in the forecast. Being the over prepared person that I am, I brought a REDCAMP Waterproof Camping Tent Tarp to put under the tent if needed in an emergency.

The Sundome definitely feels like it is designed to be a summer or warm weather tent. Although I don’t have any reason to believe that it wouldn’t work in the cold weather. As long as you set the Sundome up properly it can be used as a 4 season tent. For this trip it would be perfect.

The first night in the Sundome was rather uneventful. The Coleman Dome Tent

did a great job at keeping the bugs out. Believe me when I say that the mosquito’s were out in full force. We had a great nights sleep with a nice breeze blowing when we woke up in the morning.

Around lunch time on the second day, it started to get cloudy. An hour so later there was a steady rain. For the most part, the tent held up great to the rain. I was prepared of course with some Kiwi Camp Dry Heavy Duty Water Repellent.

Luckily I didn’t have to use any at all. It probably rained half an inch or so that second day. No condensation was present at any point on the trip.

From what I have seen personally, I think Coleman’s research and development team has really stepped it up.

can compete with any of the other budget tent options on the market. Coleman seems to get a lot of unneeded hate lately. I think most of the hate for the tents comes from user error. If you set the tent up properly, it will work as designed. As well as keep you warm and dry.

At a few points in our trip, the winds were gusting over 30 mph and the tent held up great. As I stated previously, make sure you take the tent out at home and learn to set it up properly. Most of the problems I have read can be attributed to user error during pitching.

did great on our camping trip. It was tested with some pretty nasty rain. As well as some gusty wind with the rain. I would recommend this tent for anyone on a budget, or to use to learn how to tent camp. I see no reason it won’t last you for many years to come.